Hello, pixies and sprites, to the warmer start of the year. The blog has been rather silent here, mostly because I run two campaigns in my free time (so I dont have much time in the slightest bit).

Codex Anathema is running the RPG Blog Carnival this month, and its topic is a bit different then most: this time around, it deals with DM’s/GM’s bending the rules a bit for thematics. And while I generally stick to RAW (Rules As Written), I do like to alter things to be more interesting from both a mechanical and story point of view.

Monsters: Variation is the Spice of Life

So when you have multiple friends who 1) have the Monster Manual and 2) are not so good at keeping meta information from blending in with the knowledge that their character would have, it can be a bit frustrating to plan encounters. I found that there are some relatively easy ways to keep those inquisitive sort on their toes, not aware of threats.

To better explain, I’ll use examples of how I’ve changed up the dynamics of how certain monsters work.

Shadows: Shadows are literally that. Hazy blackened figures (if you’ve seen Dementors in Harry Potter and the Prisoner of Azkaban, you know what a Shadow is). However, to a character who does not focus on Strength as a stat of importance, they can be generally shrugged off.

I have made my Shadows a bit worse. Seeing as how there are so many PC options that rely on Dexterity, I made my Shadows either drain a PC’s Strength or Dexterity. The chance of death, when either stat reaches 0, is still the same but it strikes fear into Rogues more then you could imagine.

Hag Covens: ask any of my players, and they’ll tell you that a monster I use somewhere in all of my games would be Hags. Now, I generally don’t use hag covens, mostly because that means more that I have to keep track of.

However, in a recent game that I am running for some in-person friends, I finally used the optional Hag Coven rules in the Monster Manual, but with a bit added. Instead of the standard spells the Coven would get, I swapped them out to be more thematic with each hag in the group. In this case, it was one Night Hag, Green Hag, and a Sea Hag (who should not be working together at all).

While the combat ended shortly, they were able to use some of their coven spells to throw them for a loop. Not to mention, with the variation of each Hag’s innate abilities, it was a fun combat to run for both me and the players.

In addition, each room in the complex of the group was themed after one of the Hags in the group, and the party was trying to figure out what was the deal with this eerie trio of women who were stealing selkie skins.

The Fey: I personally don’t like how 5e treats creatures with the Fey typing  as diminutive tree-hugging hippies, as actual faerie folk are actually terrifying in theory and abilities.

In my game worlds, I don’t go off of their Monster Manual/Guide to Monsters/ Tome of Foes listing, but the actual mythology behind the creature and the culture it comes from (if it has a real world equivalent).

Something I have added to any creature that has the Fey Ancestry trait or has any racial association to faerie is an actual downside to playing it: Cold Iron Vulnerability. In folklore, the Faerie Folk/Good Neighbors do not like iron, which keeps them from crossing thresholds, doing certain actions, etc. I utilize that in my games as the note I have on the side. As many races in my worlds do have some sort of ties to this mysterious, magical creature typing, this is an extra threat to these characters. I also have rules for making a weapon coated and made from the material.

Naiads, a homebrew race which I say are fey water spirits, were changed to minor elementals, as the player didn’t see their Naiad character as fey-associated. So, Keth was 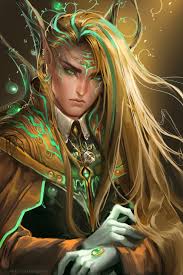 changed to an elemental similar to how Genasi could technically be considered that. Instead of knowing Sylvan, Keth had Aquan as a racial language.

Elves/half elves and Firbolgs, as well as Kitsunes, Dryads and Selkies, (the last three are all also homebrewed) were all given Cold Iron Vulnerability. This has led to a kitsune PC taking damage from touching dwarven made cold iron mining tools being harmed, and both a Dryad PC and NPC being terrified of cold iron bullets from fey who were immune to that most unholy of materials. The NPC also has still-visable scars from cold iron plated swords striking his skin. It is something that not even the Archfey can avoid.

In a game I am sporadically playing, the DM has allowed all of a PC’s spells to largely do acid damage as they have become known as the Acid Wizard. This makes jokes in-game hysterical but his spells are going to be useless when we get to an enemy who’s immune to that….

Dragonborn have tails as well as Dark Vision. Stylistically I like the idea with tails a lot better then lacking, and why wouldn’t they have Dark Vision if their ancient, powerful ancestors do? Thematically, it doesn’t make sense (at least in my head it doesn’t).

Druids in my worlds can Wild Shape into Swarms and not just singular creatures. This is because like classic faeries, druidic type characters in folklore and mythology were able to do this sort of thing, including the Celtic goddess Morrigan, goddess of death, war and magic (overall, a complete bad-ass).

If you would like to join in on the fun with this month’s Blog Carnival topic, head on over to Codex Anathema’s post and participate for the month of April!

One thought on “The Art of the Character: April RPG Blog Carnival”